The stars come out at night at Jenny Wiley Amphitheatre

It was the summer of 1964, and as the house lights came up, the first notes from the overture of South Pacific drifted into the treetops. The first production at Jenny Wiley Amphitheatre was brought to life.

Now in its 54th year, the Jenny Wiley Amphitheatre is one of the longest-running outdoor theaters in the United States, and, in turn, has established itself as one of the premier regional venues for professional live theater.

Located in Jenny Wiley State Resort Park, the open-air stage seats around 750 people and blends into its surroundings, creating “a communal experience for actor and audience alike,” said Casting Director Joey Murray. This summer will be Murray’s 11th production with the Jenny Wiley Theatre.

Their collaboration conveys the excitement and dedication to live theater and, ultimately, to their audiences.

“I don’t think there’s anything as nice as when it’s beautiful out, and you’ve got a great show going, and the audience is full,” Willard said.

“Both Darryl and myself are deeply committed to custom theater unlike anything anyone has ever seen before. How can we tell the story in a way that the audience is going to want to see it, and also surprise and challenge them?” Murray said.

This year’s productions are a small town challenged by rock-n-roll in Footloose and the quirky retro-inspired comedy, Hairspray.

Murray and Willard share a deep commitment to their craft, from the casting to set design, and provide a place of growth to rising theater talent, which Murray describes as a “matchmaking” process. Their combined experience creates a chemistry between cast and crew members that contributes to the performance magic onstage.

“For instance,” Murray said, “the summer productions have become an amalgamation of New York talent, apprentices from all the top musical theater university programs from around the country and also some local talent. So, that alone — the marriage of bringing in all these different people from different backgrounds and different walks of life and different goals and experiences — that is in and of itself a feat to get all those people together.”

Jenny Wiley Theatre sets a gold standard for stage productions and continues to uphold that tradition with its live five-piece orchestra and professional staff. The first step in the process begins with the input by JWT board members. The committee chooses two recognizable, family-friendly shows to produce. With that decision made, Willard and Murray then begin to look at options for cast and crew.

Though plans are set months in advance, they conduct auditions in the spring. Roughly 70 percent of the company is cast through a “cattle call” audition, and the remaining 30 percent from the “cream of the crop” of the local talent pool.

“You often wouldn’t know who’s who — whether they are local talent or casted from New York City — our kids are part of a professional production. And that’s the point, that’s what we’re trying to do,” Willard said.

“We audition in three places,” Willard explained. “We do a local audition, obviously, for our local people. We do an audition at Southeastern Theatre Conference, where we get most all of our interns and college-age crew, and there is an audition in New York.”

The value of regional theater

Regional theater is an important stepping stone for rising designers, actors and other personnel.

“It’s a really important turning point for any director to get to direct regionally, to test your work outside of New York City theater. To get your work to be as relatable to as many people from different backgrounds as possible, is special.”

Murray, who is directing Footloose this summer, exudes appreciation for his experiences at JWT.

“I am so grateful,” he said. “I can’t get over all the different types of shows that I’ve gotten to direct. I’ve gotten to refine my craft as an artist there, and with Darryl at the helm, his eye for design and for up-and-coming artists is impeccable, I’d like to think. What has been amazing about Darryl, his vision for the theater — he’s been committed to the next generation of theater. That means bringing in young up and coming directors from New York, choreographers and the next generation of designers. And, he is really good at grooming them and giving them the freedom to build their own brand.”

During the rest of the year, Willard emphasizes JWT’s mission to serve the region as an educational facility through its Footlights Youth Theatre summer camps, workshops and productions in Pikeville. Willard nurtures local talent from the ground up with the help of his wife, Kim, who serves as the educational director.

The Footlights youth workshops take place at Jenny Wiley Theatre’s main campus in Pikeville. The amphitheater in Prestonsburg was the primary production location for 50 years until 2014, when the cities of Prestonsburg and Pikeville established a mainstage indoor theater and educational facility. The two locations help expand the theater’s outreach.

Footlights summer camps provide children in eastern Kentucky the in-depth opportunity to learn the craft of theater from the pros. Participants learn every phase of producing a live stage production, from acting to behind-the-scenes roles, with hands-on experience and ample performance opportunities year-round.

“We have a great student this year, Payton Trout. He started [in Footlights] and is going to play Corny Collins,” Willard said. The character Corny Collins is the host of a TV dance show in Hairspray. It’s an exciting opportunity for a local actor to be featured in a major role, Willard said, and is a testament to long-term development of homegrown talent.

Once every role is cast, and each design element is in place, cast and crew arrive in Prestonsburg and settle into the cabins provided at Jenny Wiley State Resort Park. They begin the rigorous schedule of back-to-back eight-hour work days, with rehearsals scheduled 10 days before opening night. Though it sounds intense, the entire company is used to the demands of a face-paced production schedule.

Murray initially didn’t realize what a legacy the theater company had, but soon came to appreciate how important it was to both his career and its importance to the region. “You get to be a part of a town’s history,” he said.

Live theater is its own animal, which Willard describes as an “old school” experience because there are an infinite number of variables the performers and technical staff must constantly manage on any given night. That’s why Willard and Murray make sure the people they hire are prepared and, ultimately, have a good sense of humor.

“Outdoor theater is just so beautiful,” Murray said. “Why the amphitheater is so special — you talk about on your toes, unpredictable — the theatre has no roof. And so, you’re performing under the, I guess, goodwill of Mother Nature because you just don’t know what’s going to happen.”

The 2017 production of Tarzan was an excellent example, he said. “To do a show outside without the back wall, looking straight into the forest — you didn’t know where the sound effects began and nature started. It was magical. And then you’ll see a bird fly by, and there’s bugs and there’s things [in the air] — it was a magical show to do outside, I don’t think I had ever experienced anything quite like it.” 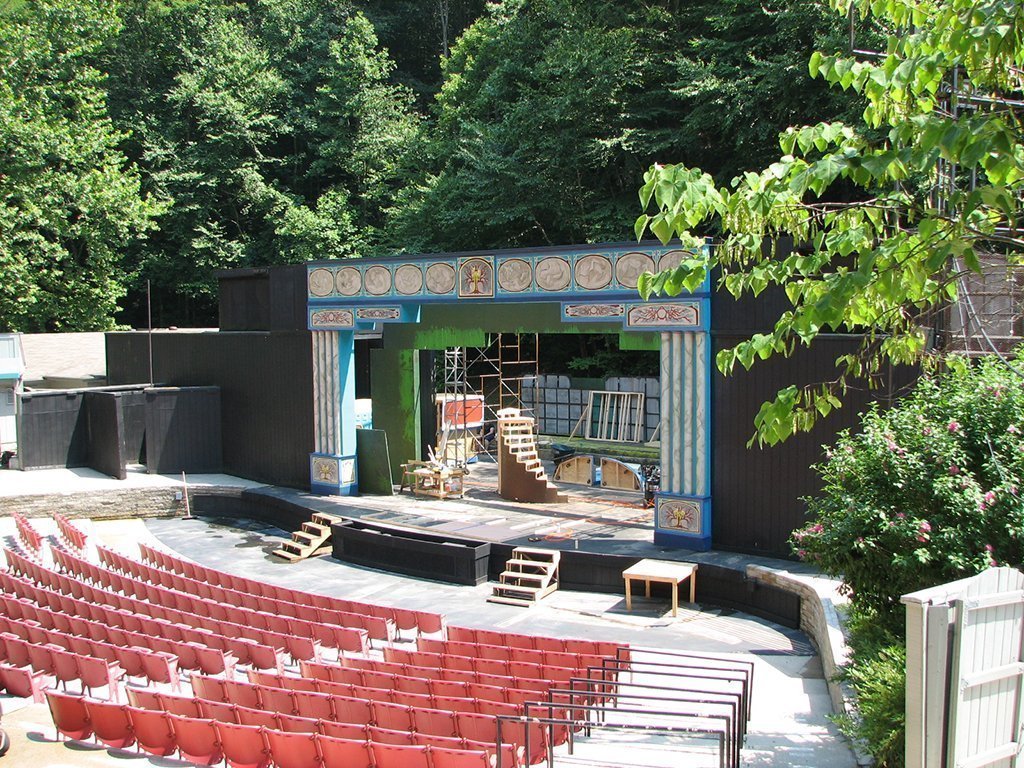 In January, the amphitheater was temporarily closed to repair substantial electrical and structural damage from its year-round exposure to the elements. Now that repairs are complete, production is underway for the summer season. As performers and crew look forward to the shared energy and excitement of these live productions, returning members anticipate the warmth and welcome they receive when in Prestonsburg.

Actress Alison Nusbaum has performed in three shows at the main stage in Pikeville and looks forward to her third summer at the amphitheater, playing the role of Ethel in Footloose. Despite the fact that performing outdoors comes with its own set of challenges — from wearing heavy costumes in the 90-degree heat to dodging bugs onstage — Nusbaum cannot hide her affection for the community and her “Kentucky family.”

“One of the reasons I continue to go back to that theater is that I really enjoy the fact that they use local actors,” she said.

It gives Nusbaum and other company members the chance to connect and mentor fledgling artists. The opportunity to learn by doing was something she didn’t have in high school. For Nusbaum, teaching others is a fulfilling way to help define her craft and contribute to the evolution of young theatre students.

“I learned just as many things as they did,” Nusbaum said.

The programs at Jenny Wiley Amphitheatre create a special bond between the community and the company members, where shared support acts as fuel for growth and progress in the region.

This year, the community will celebrate its support of theater arts with an evening gala July 7 that coincides with the finale of Footloose.

14 of the Best Valentine’s Date Ideas