Many people ask when traveling to this area for the first time, “What is that vine growing up the trees and telephone poles?” Growing up in southern Appalachia or the southern states, we take for granted that everyone recognizes the invasive plant that has been nicknamed “the plant that ate the south”. It has been part of our landscape for almost a century! Kudzu is much more than a plant to entertain children’s imagination while riding in the backseat of a car looking for dinosaur, bunny, and bear shapes within its vines. Kudzu is as much a southern staple as sweet tea, gravy, and cobblers. 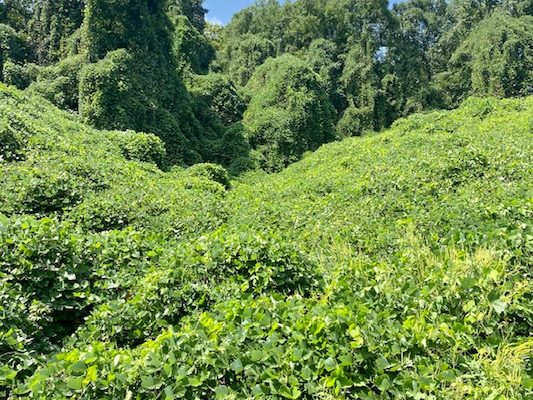 Kudzu was widely planted in the southern states after the Dust Bowl of the 1930’s for crop erosion and
to aid nutrient lacking soil. Channing Cope, a radio host and columnist in the 1940’s, stated that the South was “waiting for the healing touch of the miracle vine”. People were amazed by the plant due to its growth rate, which can be as much as one foot per day – growing vertically and horizontally in full to partial sun. That amazement was short lived. After less than two decades, the farmers of the South no longer believed in the “miracle vine” as a grow crop. They could find no beneficial use for the fast growing vine that smothered out and killed all other plants in its path. Even though it was no longer being planted, the kudzu vine had dug its roots and continued to thrive on its own.

From an agricultural standpoint, kudzu is now considered a nuisance and invasive plant that is virtually indestructible. Even though it has a bad classification from most, it does have benefits to humans. The root, flower, and leaves are turned into medicine, which is currently used to treat alcoholism and reduce the symptoms of an alcohol induced hangover including headache, upset stomach, dizziness, and vomiting. Basically, it’s giving Pedialyte a run for its money. It, also, has other health benefits which include treating symptoms of metabolic syndrome and menopause, regulating glucose levels, and inflammation reduction. The leaves, vine tips, flowers and roots are edible. The leaves can be eaten like spinach, raw and cooked. It has been said that young kudzu shoots taste similar to snow peas, which makes sense considering they are part of the bean (legume) family. So, not all aspects of the kudzu vine are terrible. 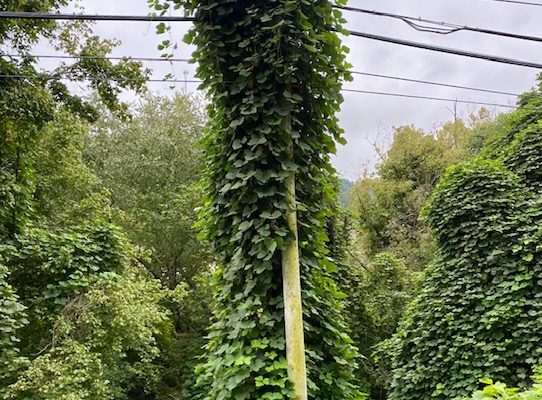 Now almost a century after its introduction, kudzu fills the southern roadsides of America and appears to be indestructible. But will it always fill the roadsides? The answer is a possible no. In 2009, the Japanese Kudzu bug hitched a ride to Atlanta. It is now multiplying at rapid rates and is infesting the kudzu vines and destroying the once indestructible vine. This mighty bug has a more common name, and many would be surprised to know that it is the “Stink Bug”. Not only does it destroy kudzu, but it also destroys soybean crops. Then it makes itself at home within dwellings until the warmer months arrive again.

So, let’s think about this…do we prefer kudzu in our area or stink bugs? Honestly, we don’t have a choice in this battle. We will have to wait and see what Mother Nature has in store for the pesky little stink bug and the enchantingly wild kudzu vine.