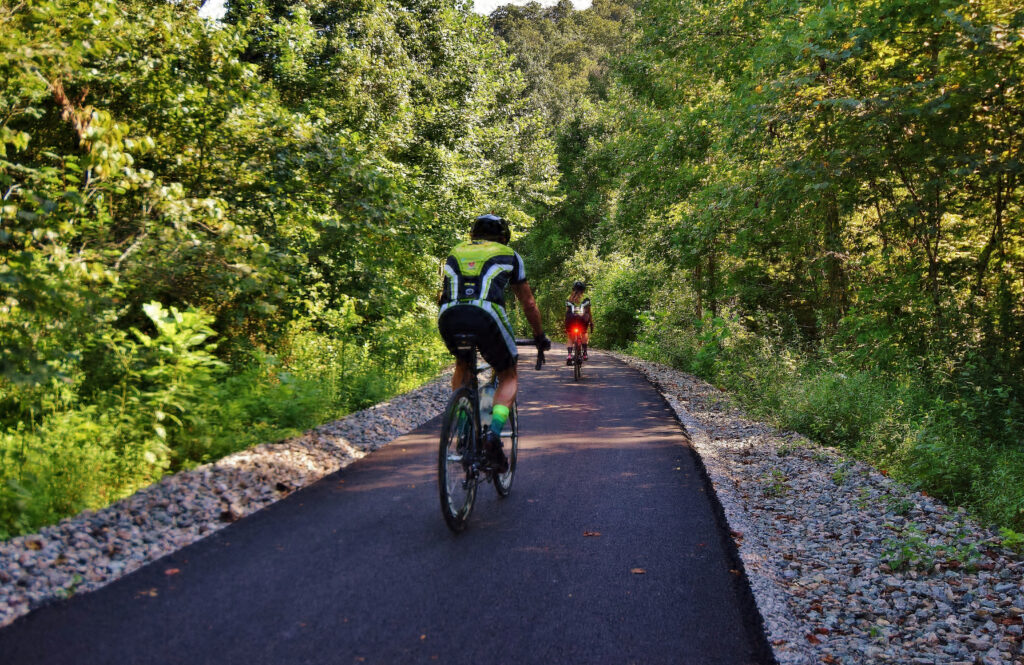 The history of coal runs deep through the valleys of eastern Kentucky, with many towns actually founded by coal companies. The railways, roadways, and waterways have undergone great changes over the years, especially when it comes to how they’re traveled. Some paths that were once bustling now sit relatively dormant. With overgrown weeds and rusty road ties, the railroad running from Prestonsburg, Kentucky to the neighboring town of David was a glaring example of such. While industries have changed in eastern Kentucky, the tenacity, innovation, and pure grit has only increased, and Prestonsburg’s newest trail system is proof. The Prestonsburg Passage is an 8.6 miles paved trail, 17.2 miles round trip, that runs from Prestonsburg to the coal camp community of David, Ky. The railroad ties that once only saw grassy overgrowth were replaced with miles of asphalt that has created a connective trail offering beautiful views of Appalachian nature and history.

HOW IT CAME TO BE:

Opened in August 2020, The Prestonsburg Passage Rail Trail represents more than just a recreational trailway. The railroad corridor aims to spur economic development via recreational tourism while supporting a healthier and improved local quality of life. With a strong connection to coal mining, it made sense to utilize the former route of the coal-hauling CSX Railroad between Prestonsburg and David. The Prestonsburg to David Rail to Trail project extends the existing Garfield Trail, connecting the county seat and first established town in eastern Kentucky, Prestonsburg, to the historic community of David, a former coal town. However, all involved knew it would not be an easy undertaking. After extensive planning and projecting, the City of Prestonsburg competitively earned a $1.95 million Abandoned Mine Lands (AML) Pilot Grant in 2016 for the 8.6 mile project to come to fruition.

As City of Prestonsburg Mayor, Les Stapleton, envisioned the limitless possibilities for the community, he began seeking opportunities to revitalize or repurpose current structures. Stapleton says, “I pushed for the trail because I have seen firsthand the impact that tourism has to our local economy. Something that was, does not always need to be. We envisioned a new type of trail for our community that would redefine connectivity within our mountains. The Passage has given a boost for our economy and the health and well-being of our citizens. This opportunity allotted to us through the AML funding has allowed us to welcome visitors from all around the United States, especially those interested specifically in railway projects.”

Could a trail replacing an abandoned mining route really make way for tourists and residents to get back to nature? It certainly seems so. On any given weekend, the trail sees visitation from 300 or more participants. Congressman Hal Rogers recently shared, “The people of Floyd County are to be commended for their diligent work to make Prestonsburg a destination for folks who want to get outside and enjoy life in Eastern Kentucky. The Prestonsburg Passage could be one of the most impressive trails in the country – it’s a major tourist attraction…I believe we will see the fruits of your labor here in Prestonsburg for many years to come.”

How exactly did the name “Passage” come to be, anyway? As eastern Kentucky looks from old industries to new, we set our sight upon a literal pathway from our past to our present. For decades, the CSX railway moved coal from our small corner of the world to points throughout the entire country. The train tracks may have cooled, but the passion of our people certainly did not. This rail to trail represents the region’s growth, desire for partnership, and new opportunities while honoring the history and natural beauty that has brought us to today.

Prestonsburg Tourism Executive Director, Samantha Johnson, says, “We’ve seen many changes in our mountains, and the resiliency has created such beauty. Here, we’re creative, appreciative of our natural beauty, and value community. Interestingly, it seems that all of those aspects are now being showcased greater than ever before. This very trail is a prime example of each of those Appalachian pillars”

Much can be seen and experienced in nearly 9 miles. The trail features six restored bridges along its route, including one very noteworthy School Bus Bridge that was most recently named “Best Hidden Secret” by Bridge Hunter Chronicles. The bus bridge provides a wonderfully unique photoshoot backdrop. The Floyd County School District turned this wild idea into reality by donating a recently retired school bus, which was then reconstructed into a perfect fit for the path. The Bus Bridge is approximately 6-miles from the Archer Park entrance but can also be accessed directly from the 404/1210 intersection of David.

The Passage is wheelchair-accessible and allows hikers, horseback riders, bicyclists, and inline skaters a chance to explore the inspiring mountain scenery. Little to no elevation makes this the perfect trail for all skill levels. Don’t be surprised if you happen to cross  wildlife in the area, including elk, deer, and turtles. While offering breathtaking views of Appalachian countryside, to visitor’s delite, the Passage is often veiled with a canopy of trees, providing cool shade to those getting their miles in.

There is also plenty to see for history buffs, including the Middle Creek National Battlefield. During your stop-off, learn about the Civil War battle that took place here in 1862 between Union troops led by Colonel James A. Garfield (who later became President of the United States) and the Confederates led by Brigadier General Humphrey Marshall. On into David, travelers will notice a historical marker dedicated to

the one and only Daniel Boone. Legend has it, Boone called eastern Kentucky his favorite hunting grounds and was said to capture three bears before breakfast with his bare hands. At leasts, that’s how the legend goes.

As visitors journey from one end to the other, keep an eye out for the beautiful adorned mile markers. Many of the original markers were salvaged and revitalized by local artisans and sponsored through local businesses. Each marker tells its own unique story, much like the trail itself.

There aren’t many trails out there that are practically ideal for everyone. The Passage has an asphalt surface and features very little elevation change throughout its course. The ease allows guests to not only enjoy the time for movement but make it an immersive trip through nature and history. Only non-motorized uses are allowed. Walkers, runners, cyclists, strollers, and wheelchairs are all welcome on the trail. Throughout construction, it was extremely important for the trail to be accessible to all. Prestonsburg resident, Adam Williamson, shared his experience about being able to explore nature independently for the first time in his life. “Nature is not handicap accessible, and it never would be on its own,” Williamson said, “I wanted to access it, but there was always a barrier so I could only go so far.”  This barrier is now being broken as the Passage offers Williamson, who uses a wheelchair, an opportunity to get up close to nature. 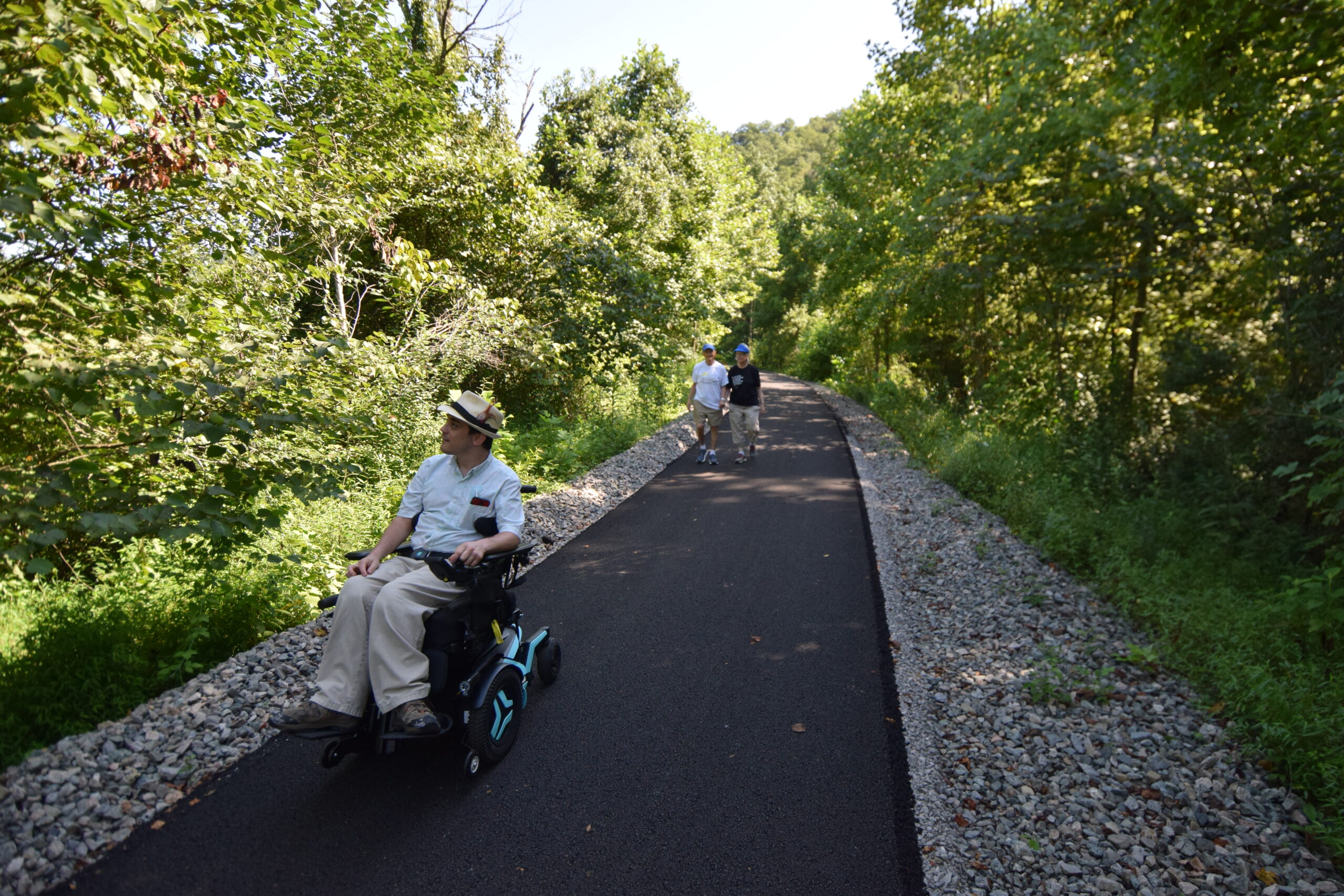 The Passage also offers sheltered rest areas, picnic tables, and benches for resting along its trail in addition to multiple fix-it stations for bicycles. The Passage is conveniently located near several lodging options in Prestonsburg. Most recently, a brand new RV Campsite equipped with amenities and Wifi opened up along the trail.

The Passage features multiple access points, including West Prestonsburg and David, KY. However, the most common starting point is at Archer Park. The large, family-friendly park offers ample parking, space to unload, and has a direct ADA accessible connector to the trail. On the third Saturday of spring-fall, golf carts are also allowed on the trail for those that would not be able to explore the path. Archer Park also offers golf cart rentals.

The Prestonsburg Passage has only scratched the surface on the long-term mission of connecting Floyd County, KY to its future in economical outdoor recreation. The City of Prestonsburg is continuing to apply for planning and developmental grant funding. Up next, expanding the trail into an Interpretive Educational Trail in which the public can learn of the nature, wildlife, and history that surrounds them while exploring. The trail committee charged with leading this expansion looks to create and implement a dynamic plan for ongoing health, community interconnection, inclusivity, education, tourism, and cultural exposing benefits. What’s possible for the Passage? Well, in the coming years, visitors to the Passage can look to experience butterfly stations, bird watching zones, informational kiosk stations, interpretive signage, expanded seating, art installations, and a tranquil park. When Prestonsburg looks at this trail, they see more than 8.6 miles of secured pavement. The Prestonsburg Passage is a connective link to a better quality of life and a prime example of the ingenuity that has defined this region for centuries.

In addition to The Passage, the foothills of eastern Kentucky offer abundant opportunities to explore the great outdoors all year long. Take the Prestonsburg Passage for a bike ride, a scenic walk, or just explore this unique and historic rail trail in Kentucky. Bikes can be rented locally through Pro-fitness. The trail is open daily from dawn to dusk. The Prestonsburg Passage is also located conveniently close to the Dawkins Trail, another incredible rail to trail project in Kentucky. Both trails have been named as Top 10 Trails in Kentucky and can be explored in the same weekend!